More than 12 years after plans were first proposed, the disputed planned housing development in Churchton, MD – Turtle Run at Deep Cove – may have been dealt its final death blow thanks to the long running efforts of CLA volunteer attorneys in partnership with South County Citizens for Responsible Development (SACReD), the West/Rhode Riverkeeper, and the Chesapeake Bay Foundation (CBF). The battle to save one of the last, pristine tidal waterfront areas in Anne Arundel County has been hard fought by CLA volunteer attorneys John Wyss of Wiley Rein (Washington, D.C.) and Jonathan Guy of Orrick (Washington, D.C.).

After reversing its own decision in 2016, Anne Arundel County approved Snyder Development Corporation’s plans to build 11 single family homes on one 40 acre lot within the Resource Conservation Area (RCA) of the Critical Area (land within 1,000 feet of the Chesapeake Bay or its tributaries).  RCA rules specify that only one house per every 20 acres is allowed.

Using a definition of “site” that it found in Maryland’s stormwater regulations, Snyder argued, and the county agreed, that it could build the 11 homes within the RCA if it transferred the 1 in 20 density requirement to another parcel of land. SACReD, the Riverkeeper, and CBF appealed the county’s approval to the Anne Arundel Board of Appeals.

Last week, Maryland’s Critical Area Commission (CAC) found that Snyder’s proposed definition of “site” did not meet the requirement that the county implement state regulations regarding the Critical Area. While it waits to be seen whether the Board of Appeals will move forward with the current appeal of the proposed project, or dismiss it as moot, this is a huge step in the right direction of conserving sensitive and critical Anne Arundel County lands that protect, filter, and provide important natural habitat to the Chesapeake Bay! 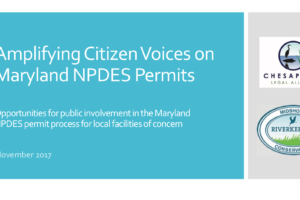 Check out the Power Point presentation, the NPDES Citizen’s Guide[...] 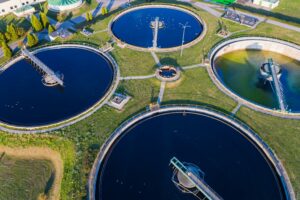 A New Generation of Advocates

One of the most effective ways to influence the future[...]