Instead of a major residential and commercial projects being constructed on the Bay, hundreds of acres of conservation area in Northumberland County, VA were placed in preservation in 2012. The proposed development project would have destroyed migratory bird habitat, oyster bars, and other wildlife habitat as well as degraded inland waterways. Victory comes after a lengthy series of hearings, meetings, and negotiations on behalf of the Citizens to Protect Bluff Point. CLA volunteer attorney, Tazewell E. (Ted) Ellett, was pivotal in providing assistance to the citizens’ group in achieving a much greater victory than anticipated. 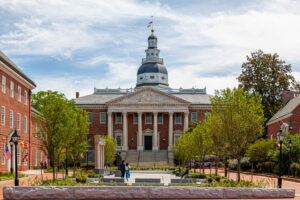 By Evan Isaacson The 2022 Maryland legislative session will be[...]

Yellow Perch spawning in the headwaters of the Magothy River on February 26, 2017

Yellow perch spawning in the headwaters of the Magothy River[...]