The Chesapeake Legal Alliance (CLA) is pleased to announce the appointment of Eliza Smith Steinmeier as its new Executive Director.

Russ Stevenson, the Chairman of the Alliance, said, “As a long-time member of our Board, Eliza volunteered to fill in on a temporary basis while we searched for a successor to Jackie Guild. She has done an outstanding job, and we could not be happier that she has now agreed to become Executive Director on a permanent basis. Her background, experience and familiarity with Chesapeake Bay issues make her ideally suited for her new role.”

Ms. Steinmeier is a graduate of Bucknell University and the UCLA School of Law. After becoming a member of the California Bar she was an associate in a small public interest firm in Los Angeles where she represented various California Waterkeepers in legal proceedings against polluters. She has also worked with environmental groups in Mexico, where she lived from 1997 to 2000, including the Intercultural Center for the Study of Deserts and Oceans in the Mexican state of Sonora, as well as Waterkeeper groups throughout states of Baja California and Baja California Sur. In 2006, she moved from Los Angeles back to her hometown of Baltimore. There, she founded the Baltimore Harbor Waterkeeper and served as Executive Director and Waterkeeper until 2012, when she shepherded it through a merger into Blue Water Baltimore. She joined the Board of the Chesapeake Legal Alliance in March 2012. Ms. Steinmeier lives in Baltimore with her husband, Matt, and two children.

The Chesapeake Legal Alliance is dedicated to using the law to protect and restore the Chesapeake Bay and its watershed by providing pro bono legal services to individuals, environmental organizations and citizens groups working to improve the health of the Bay.

A New Generation of Advocates

One of the most effective ways to influence the future[...] 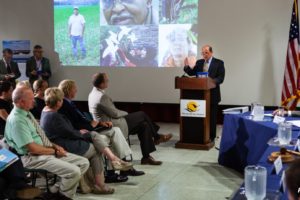 CLA Executive Director, Jackie Guild, was presented with a citation[...]