For decades, the 2,300-acre sprawling former steelmaking complex at Sparrows Point, just south of Baltimore, has been releasing hazardous substances to the Patapsco River, which flows to the Bay. This is the legacy of over a century of steel mill operations, by Bethlehem Steel until its bankruptcy in 2002, and thereafter by a series of owners who were never able operate it profitably and finally shut it down in 2012.

The steelmaking operations left the site heavily contaminated with metals such as chromium, lead, mercury, and arsenic, as well as organics like PCBs and benzene, which have been carried to the Patapsco River by rain runoff and groundwater migration. Large quantities of hazardous waste were disposed of in unlined landfills and lagoons, which contribute to these releases. This has severely impacted both the water quality and the health and safety of residents in neighboring communities, such as Dundalk.

After numerous citations by EPA and the Maryland Department of the Environment (MDE) for violations of federal and state hazardous waste laws, Bethlehem Steel entered into a consent decree with the agencies in 1997 to conduct a comprehensive site-wide investigation to identify the contaminated locations, including off-site migration, do a risk assessment, and design a remedial action plan.  The consent decree had few deadlines and no built-in penalties for violations. It was not vigorously enforced by the agencies. The result is that much of this work still remains to be done, along with a cleanup.

In 2010 the Chesapeake Bay Foundation (CBF) and Blue Water Baltimore (BWB), represented by CLA volunteer attorneys issued the then owner of the facility, Severstal Sparrows Point, for extensive violations of the Resource Conservation and Recovery Act (RCRA), the Clean Water Act and corresponding state laws. While that suit was going on, Severstal sold the facilities to a subsidiary of RG Steel, LLC, which then went bankrupt in 2012.  Although CBF, BWB, and the government persuaded the Bankruptcy Court to set aside $500,000 from the bankruptcy sale proceeds to investigate offsite contamination, the extensive contamination on the site was left unaddressed.

Then came some good news. In 2014, a group of Baltimore-based investors doing business as Redwood Capital Investors bought the site, which is now owned by Tradepoint Atlantic, formerly called Sparrows Point Terminal, LLC (SPT). Unlike its predecessors, the new owners will not be making steel, but cleaning up and developing the site for use as a transportation hub and light industry. They plan to seek long-term leases from tenants, thereby indicating that that they want to be here for the long term. They have a huge stake in cleaning up the site, which must precede any development.

To ensure performance of the environmental work, in September 2014 MDE entered into an Administrative Consent Order (ACO) with SPT, now called Tradepoint Atlantic. The ACO requires Tradepoint Atlantic to complete the site investigation and risk assessment and carry out a comprehensive cleanup plan consistent with RCRA and state law. This ACO, unlike the 1997 consent decree, has specific deadlines and stipulated penalties for failure to meet any of them.

Tradepoint Atlantic has posted financial assurance of $48 million to ensure performance of this work, and the amount must be revised upwards if estimated costs of the work go up. Tradepoint Atlantic is also obligated to reimburse annually MDE’s oversight costs up to $100,000 per year. They also paid $3 million towards the offsite investigation and remediation. Meanwhile EPA entered onto a parallel Settlement Agreement addressing many of the same activities, thereby providing federal as well as state oversight and enforcement.

Obviously, this cleanup and reuse project will take time, and CBF and BWB will monitor closely its performance. That said, this is the most encouraging development at Sparrows Point in a very long time.

Ridge Hall is a retired partner from the law firm of Crowell & Moring in Washington, D.C. and Vice Chair of the Chesapeake Legal Alliance

HUGE WIN for the BAY: Bay Clean Up plan is LEGAL under the Clean Water Act!!!

This morning, the Third Circuit Court of Appeals confirmed that[...] 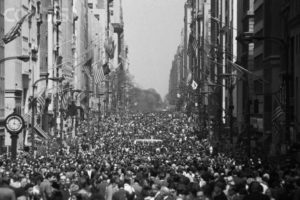 This webinar, presented by CLA’s Evan Isaacson and Russ Stevenson,[...]